Get peace of mind and advanced strategy. Make sure your mark is available before you spend time and money applying.

Get your comprehensive search report in 3 easy steps.

Give us some basic information about trademark and describe your goods and services you provide.

We run a comprehensive search

We send you a detailed report

The detailed report identifies all matches, including full trademark registrations for international, federal, and state trademarks.

Why run a search for similar trademarks?

Before spending your time and money filing an application you should do a search to see if your mark is already in use or registered by someone else. A search will help avoid obvious duplications of pre-existing marks. If the USPTO rejects your application, the fees to Trademark Engine and the USPTO are not refundable. If your company is just beginning, it’s better to make name changes now rather than invest in building a brand only to learn that you have to change the name and lose all of your goodwill. 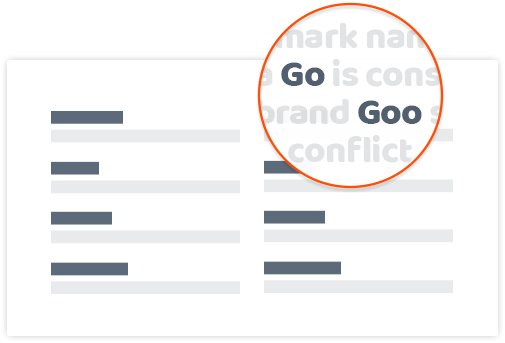 What concerns should I have with my name or logo?

Choose the search option that works best for you.

The federal search provides any similar names, logos, or slogans that are registered or pending with the USPTO.

The state search does the same for all 50 states.

Identifies any matches with all the information you need to strategize your next step.

Includes the information from the Federal and State Search, and also includes:

We run a search for all corporate and other business entity names in all 50 states.

We search the corporate directories for listing of others who might be using your name.

Proprietary internet searches reveal the use of your name that may be protected by common law trademarks.

We search the most common top level domain names to see if anyone is using your name online.

Includes the information from the Federal, State and Common Law Search, and also includes:

We search for pending and registered marks in these multi-national jurisdictions:

 Why run a search for similar trademarks?


It may be more time efficient and cost effective to do a quick search before registering a trademark. A search may help avoid obvious duplications of pre-existing marks and the expenditure of nonrefundable applications fees.

Newer companies may more easily make name changes while they are getting off the ground than years later and after substantial investment in a brand and associated goodwill.

Running searches with the USPTO does not guarantee superior rights to a particular mark. There could be someone already using a similar mark, but who did not register it with the USPTO. In that case, a registration could be subject to challenge by the owner of the earlier-used mark based on of common law trademark rights.

The United State Patent and Trademark Office will not necessarily approve every name for a trademark. The USPTO generally describes names as “generic,” “descriptive,” “suggestive,” “arbitrary,” or “fanciful.” A trademark application is more likely to be registered by the USPTO the less “generic” or more “fanciful” it is.

Ordinarily, descriptive marks are entitled to trademark protection, but only if they have gained what has been termed “secondary meaning.” In other words, the name has become so famous that despite the generic nature, the public associates the product with a specific company. One example is International Business Machines or IBM. Fledgling companies generally are not well known enough to have attained a secondary meaning. Generic names generally do not attain secondary meaning, so are unlikely to be registered by the USPTO.

The chances of approval normally improve with suggestive marks, which often hint at the quality or another aspect of the company. For example, “Herculean Screwdriver Company” may be more likely to be registered by the USPTO than “Strong Screwdriver,” but conveys a similar meaning. However, the line between a suggestive mark and a descriptive one is difficult to draw. Microsoft, which makes software for microcomputers, and Citibank, which provides financial services, are some well-known examples of suggestive marks. Brand owners often like these names because it gives the consumer a good idea of what the company does without the need for additional (and often expensive) education or advertising to disseminate the name for the particular product or service.

Next on the list are arbitrary marks. These are usually existing words used in a way unrelated to their normal everyday meanings. Hence, Chocolate Screwdrivers may work. The textbook example of the arbitrary mark is Apple Computers - not to be confused with Apple Records.

Finally, fanciful marks are ordinarily the easiest marks to be approved. A fanciful mark may be a made up word or a very rarely used word that has nothing to do with describing the products. “Glotz” for a screwdriver company may work. Some examples of fanciful marks are Yahoo!, Google, Exxon and Spotify.

Other common reasons the USPTO may reject names can include the following:

 What are the different kinds of marks?


Trademarks are normally used to register a name, logo or slogan related to the sale of goods.

Service marks are often used to register a name, logo or slogan related to the sale of services.

Intent to Use applications can be useful for a future mark that is not yet used to sell goods or services. Such applications can serve to establish a company’s place in line on the date of filing as opposed to the date the mark is actually used to begin selling goods or services. Goods and services bearing the mark usually need to be sold to hold the company’s place in line and validate its application, and then update the USPTO. Under those circumstances, the company may consider filing a Statement of Use, which can be done through a customized portal on Trademark Engine, and generally should be done within six months of the registering an Intent to Use trademark. Up to five additional six-month extensions may be available on request and if good cause is demonstrated.

 What do I do if someone is infringing?


The infringing party may also ignore the demand or take the position that they are not infringing. At that point, you may consider a trademark infringement lawsuit. You should talk with an attorney if you believe a lawsuit might be the right choice for you.

Successful lawsuits have common characteristics and you should discuss with a lawyer whether any of these are present in your situation:

 What is a trademark and what does it do?


One way to understand a trademark is that it is a word, phrase, symbol, and/or design that identifies and distinguishes the source of the goods of one party from those of another party. A “service” mark distinguishes the source of a service, rather than a good, but the two are typically simply referred to as a “trademark” or “mark”. In more general terms, getting a trademark protects a brand. Many of the well-known brands, logos and slogans you love, know and trust have been registered with the United States Patent and Trademark Office.

Generally, the registration of a trademark, entitles the registrant to a presumption of ownership of the brand on a national level and a presumed right to use the brand nationwide. It may help prevent someone from registering a confusingly similar mark later and may also help the registrant bring a case in federal court if someone infringes on the brand. Once registered, a registrant can typically start using the ® symbol after the name, logo or slogan.

After a mark is properly registered and used for a five-year period, Trademark Engine can also help file a “Declaration of Incontestability.” Considered by some the greatest protection under U.S. trademark law, this may help prevent others from contesting a trademark on the following grounds: (1) the mark is not inherently distinctive; (2) it is confusingly similar to another mark that someone else began using first; or (3) the mark is simply functional as opposed to identifying the source of the goods or services.

 What is a common law trademark and why bother to register a mark?


Under U.S. law, a “common law trademark” is generally established when someone uses a company name, logo or slogan in commerce, even if it is not registered. So, why pay to register a trademark when a common law trademark may already exist? Common law rights ordinarily are limited to the geographic area where the mark is used as opposed to the nationwide protection customarily obtained when a mark is registered with the USPTO. So, unless registered, the use of a mark can be geographically limited, which hampers the ability to expand the brand. On the other hand, a person using a mark in a limited geographic area could be boxed in by someone else who offensively registers a similar mark. In addition, registration of a trademark can give the person holding the registered trademark a leg up in court as to the validity of the mark and the date of usage in later trademark infringement litigation, if it comes to that. There are also favorable remedies available to registered trademark owners in the event of litigation. Finally, once a trademark is accepted by the USPTO, it will be maintained in the USPTO database, which can discourage others from using the mark in the future. Future companies should be on notice that the mark is already spoken for, which should in turn help avoid at least some disputes.

Discover if your trademark is already in use..
Start My Comprehensive Search Report